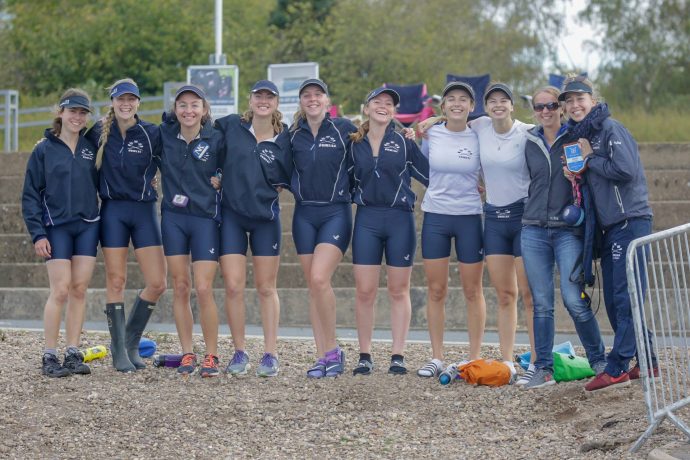 Katherine is a Biochemist at Trinity College, Oxford and will be in the bow seat of the Oxford Boat when they face Cambridge in Henley on Saturday 30th of March. We caught up with her a couple of weeks before this year’s Lightweight Boat Race.

Have you done the boat race before?

Yes, I trialled last year and was in the reserve crew.

What drew you to this particular race and sport?

Ball sports had never really been my thing, what attracted me to rowing was the athleticism and technique involved. Obviously, The Boat Race on TV increased my awareness and excitement about trialling at university level.

What is your ultimate goal for this season/race in the lead up to the boat race?

On a personal level I wanted to get a new 2k PB, which I got – but for me the ultimate goal is to beat Cambridge. I know for a lot of people a seat in the Blue Boat is on the same level perhaps (as a win) but I’m lucky that I’m not so bothered about the whole selection pressure thing, I just want to get the fastest boat out to beat Cambridge, that’s all that matters.

When did you start your training?

We started with a pre-season training camp and then we started training in Oxford from September prior to the start of term. Over the summer a lot of us kept training on our own.

So we’d have a morning session Tuesday to Thursday, getting the bus at 5:45am from Iffley to Wallingford. We would be back at 9am so we can go to labs, tutorials that kind of thing during the working day. Then there is a gym session at 5:15pm till 7pm Monday to Wednesday and 7-9pm on Thursday. Fridays are a very welcome rest day, then a double water session each day at the weekend.

How do you expect this to change in the lead up to the boat race?

It doesn’t change that much to be honest, except to include more fixtures. Sometimes the intensity of the training sessions will go up, so we might then have a few more session off and a really light recovery session in the evenings. Otherwise, it’s fairly standard routine – which is quite comforting as the pressure builds.

How do you balance academic work and training?

You get used to being very efficient and not faffing around. I really didn’t notice it that much when I started trialling. I was surprised, I though it would be a case of running pillar to post constantly but you really do just become a lot more focussed in all aspects of your life. The work has to be done, the training has to be fitted in – somehow it just works. I don’t know what I spent my second year doing when I wasn’t trialling but I think your social life does take a hit. There isn’t time to be going out especially in the evenings, but again you have to just timetable it in, fit it around everything else.

How does your social life and training interact?

My friends have got very used to ‘sorry I’ve got training’ or ‘sorry I need to go to bed’. It makes you appreciate a lot more when you do have down time and I find that a lot of my social life is spent with girls at training. It’s such a close knit squad – that in itself is often enough. They’re the people you turn to if you’re struggling because they get it, they’re going through the same thing. When we get the chance we go out for dinner or drinks together, sometimes with the other squads, thats really nice, both from a letting your hair down point of view and coming together as a squad.

How does work effect your training?

My subject sometimes ties in with my training which is quite nice, I like when I’ve done a metabolism module or whatever, and can understand that this is what is happening to my body but I guess thats not true for everyone. The dedication that you’ve had to show to keep up with your degree so far, I guess that helps with the training. I’ve never really thought about it that way round.

As a lightweight, do you have a nutritional plan that you follow? Does the extra challenge of making weight effect you?

Personally, I’m ok – I sit at around 59kg anyway, which is the cut off for us. I don’t have to worry too much about making weight, some of the girls do and we have a fantastic nutritionist with us to build our own plans. We get a lot of support, it becomes more about eating carefully to support the training rather than deliberately losing the weight if that makers sense. Obviously, weight is a factor now that we’re a lot closer to the Boat Race, but the focus is very much on eating to train.

Nakd bars! They give me an immediate carbohydrate and protein boost. Boiled eggs are also a good source of protein and a lot of us use them as part of the recommended 4-5 protein feeds per day. For things like that it might be yoghurt, protein powder, those of us that can eat meat that works as well.

Do you like training as a part of a team or do you prefer solo training?

It’s nice on the erg if you’ve got a really long piece, if you can, to just be internal and get in your own head. Obviously, in the boat you have to be working as a team, but even when we’re on the ergs I prefer it if we’re all in time. It creates a nice rhythm, so being part of a team, part of a crew is really important.

Do you find that when you working as part of a team you can push yourself more?

Being part of the team is the motivation, even if your legs are empty, you’re in so much pain that you don’t want to take another stroke, there are eight other girls in that boat killing themselves to take that extra stroke. You can’t stop, I’d never want to row in a single!

We know recovery plays a huge part in training response and performance, how are you finding balancing training with your work and life commitments to make sure you get enough recovery and rest?

It’s not too bad this year, in someways it has been easier because of my lab placement which is essentially 9-5, between training, that’s it job done and I can go home, rest and sleep. Last year, when it was more tutorial based and I was preparing for exams, it was harder because you could just go home and keep working. The needing to get up early in the morning has actually benefitted me, I was up all night far less in third year compared to second year when I wasn’t trialling. It makes you focus on adapting your work so you can fit it in properly and not be compromising on sleep.

How are you finding using with Wattson Blue?

Really useful. It’s very easy to build into the routine, it’s a quick overview of how you’re doing. I found it really useful over the summer when we didn’t have a formal training plan,  particularly for saying that I was  feeling tired and it’s not just laziness. It let me know when I needed to prioritise my recovery. The heart rate function was a really good warning sign, if it were to suddenly spike or drop down, it would let me know that I should start to adjust my training, take care of myself a bit more.

How does Wattson Blue come into preparation for the boat race?

It has definitely helped with my preparation by helping me to maintain the appropriate training intensity.

How have you found the app’s feedback?

Really useful, I like the colour coding on the feedback which helps highlight what to prioritise, like certain things that I have not been doing so well that particular week. Sometimes things might fall by the wayside and you might not even notice it. It could be as simple as having half an hour less sleep that week each night. On an individual basis that’s ok, you can get through the day, but then at the end of the week your average hours asleep can plummet.

Are you feeling nervous about the race?

Yes, it’s seven months of work and comes down to seven to eight minutes (depending on the conditions). It’s quite a lot of pressure.

Do you have any techniques to help control that nervous energy?

Breathe. Take a minute to actually appreciate what you’ve achieved so far. Remember that you have practiced for this, that you’ve trained the last seven months for this race. By the time we sit on that start line we’ll be ready. It’s quite comforting to remember that.

If you could go back a year, and give yourself one piece of advice what would it be?

Keep going, one stroke at a time. It gets tough. It is worth it. There will be a high post race to look forward to.

What has been your favourite athletic achievement so far?

The reserve race last year, crossing the finish line first. The squeal the cox let out. It was that feeling afterwards, all bundled up in a massive group hit with our coach and everyone. The feeling of ‘we’ve done this’  and the fact we did it as a team – all the hard work had paid off, and boat felt so good going down that course. Coming off the water the only thing I could think was that we’d done it. That had to be the highlight. It was really bad weather, we had poor conditions but it was all the more memorable for it.

Do you have a sporting hero?

The rest of the girls in the squad. I wasn’t sporty at school, so I don’t have much of a sporting background.  Seeing what the other girls achieve, even outside of rowing, balancing the two. I can’t imagine being part of a more inspiring squad.