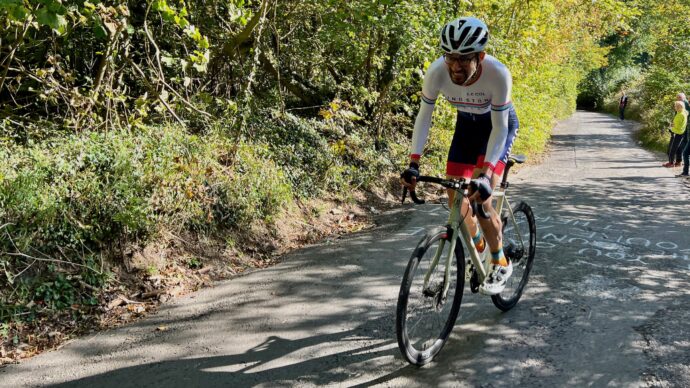 I am a fan of TrainerRoad. There, I have said it. Until last month I had never actually used the product, but:

After moving house last year, I managed to pull together my first proper indoor setup. A converted garage, plus a Wahoo Kickr and my old cyclocross bike set me up nicely for some structured training indoors.

I started training back in April (after an accident meant I couldn’t train for a few months) and I spent the first few months just doing unstructured training and smashing it on the nearby roads and hills. Doing that I managed to get my FTP from a ramp test implied 232w or 2.9w/kg to 318w or 4.3w/kg (318w and 4.3w/kg is the highest “official” FTP I have had, although I think I was much fitter in the 2019 season when I finished top 30 in RideLondon).

I ended this period of training by doing Kingston Wheelers Hill Climb on Leith Hill where I PB’ed on the hill and did my best power for both 4 minutes and 30 second, although I definitely chickened out in the middle of the race…

All of this brings us to the second week of September 2022, when I decided to sign up to TrainerRoad and give their 30 day money back guarantee a try. 20 dollars a month is not a lot to pay to add some structure to my training and maximize my potential performance given how much my “equivalent” hourly rate really is and the number of hours I spend training each month.

I really wanted to give their recommended training programme and their AI algorithms a try. So I signed up, entered my “A race” two races on 9th of October; namely Catford and Bec hill climbs. I entered them as “gravity” type races (according to https://www.trainerroad.com/forum/t/uk-hill-climbs-in-plan-builder/32477/2), followed TrainerRoad recommendation of high volume plan, and asked it to do its magic.

For people who don’t know Catford and Bec hill climbs take around 2 minutes each, so they are short sharp anaerobic/VO2 max efforts. Although you could argue 30 days is not enough for any “real endurance gains”, when the races are this short, I really expected some solid gains, especially combined with a taper.

I also sprinkled a couple of other races into the mix, including Brighton Mitre 5 min and 9 min hill climbs on the 8th October and Kings Cup Gravel race a couple of weeks before. The platform recommended 2 weeks of build and 2 weeks of speciality. It looked pretty hard with a lot of long interval sessions, some adding to 2 hours in length. It also included a “taper” to really enable me to peak for the races.

I had high hopes – I knew I couldn’t make a huge amount of gains around my 60 minute power in 4 weeks, but I really thought that so many intervals in 4 weeks are bound to sharpen up my top end, and I am guaranteed some power PB’s in my races or in the run up to them.

I have a fair bit of experience about training and recovery – having gone through the OUBC training plan, I roughly what it usually takes to become a good endurance athlete, so I am always “planning and optimising” – have I done enough quality this week? Should I do more Z1/Z2?

So it was great to switch my brain off, and just follow what the plan told me. It reduced my stress, and freed up a lot of brain power. I woke up, looked at my Wattson Blue score. If all was well, I would proceed as planned, and if my score was very low (anything in red or very low amber), I would try and move the session around to another day.

I tried to commit as much as possible to the plan – I accepted all but 1 of the adaptation recommendations and I think I “missed” or “moved around” maybe 2 or 3 sessions (correct me if I am wrong TrainerRoad). I also cut one session short to give myself more recovery for Kings Cup Gravel Race.

I sometimes increased the intensity above the 100% level, by maybe 2-5%, but I never felt the need to reduce the intensity to get through the sessions.

Well – it wasn’t what I expected. In short I wouldn’t say it worked. I finished were I really expected to, i.e. nothing magical really happened thanks to TrainerRoad which wouldn’t have happened with my own training. I had 4 races in one weekend – I was way off my expected power for the first 3 races. The final race was slightly better but still no magic.

I did produce some power PB’s or got close to my all time best:

However, put these into perspective with the fact that I did my best 4:30 power back on Leith Hill before the plan, and my best 30 second power a couple of weeks before that, and they start to look less interesting.

So how much of the performance can I actually credit to TrainerRoad? I am not sure – it certainly didn’t make me slower, but I don’t think it made me faster.

I probably made a couple of mistake that I should have known about – I overestimated the TSS from the Kings Cup Gravel race and under-estimated the TSS from warm up, etc around the races, but I would be very surprised if a couple of things like that impacted the plan significantly. I also went into the Ramp Test maybe slightly fatigued and so the FTP estimate was probably 7-10 watts too low, but again TrainerRoad had all my sessions from Strava – I don’t accept that as an excuse really.

I honestly think the sessions were just not hard enough – even though they were long, the intensity was not there despite the volume (until TrainerRoad, I dont think I had ever spent more than 70 minutes on the Trainer).

Even though the focus was on VO2max, I think a lot of the actual training was just below threshold – it just was not taxing enough. Also the regular 5-10 minutes recovery at 125 watts felt just too easy, and I couldn’t see how I could skip/reduce them mid-session.

Isn’t that the whole point? Don’t go too hard so that you can train the next day?

Yes! That’s what I thought – I completely trusted the programme, and so believed that was the plan – hit me hard, but not too hard, and I will respond by the end of the plan. But, I don’t think it worked.

What do other users think?

I chatted to a few friends and club mates who have been using TrainerRoad way longer than I have to find out what they think – here is some of the feedback I heard:

I wish I had chatted to them beforehand!!

Would you still recommend TrainerRoad?

TrainerRoad, stop it with the 30 day money back guarantee, it just doesn’t make any sense for a lot of athletes that could benefit from your platform.

I am still hoping to do the National Hill Climb Championship at the end of October, but I am going to do my own sessions because I don’t trust TrainerRoad not to just drag its, and my feet along. I am going to get a bit of help from Tom Bell’s hill climb handbook (https://www.highnorth.co.uk/store/p/hill-climb-handbook) in the meantime.

I will probably come back to TrainerRoad in the new year, after I take my regular 2-3 months off the bike but follow the recommendations below.

If you want to get faster by doing structured training, sign up to TrainerRoad, but:

So it’s not quite a “tell me what to do” training plan, but it’s pretty close. Oh, and the app only crashed on me once, which is impressive to say the least.

P.s. TrainerRoad, I wish you pulled in HRV and subjective metrics into the platform as an added dimension. I think it would have caught my lack of responsiveness to the training stimulus – happy to help there, do message me!